Being a nature lover, I  think Ireland is more authentic  and more worthy to visit than UK . I am in love with Ireland and its people. In spite of teaming with sad stories of violence, revolutions, conflicts, Irish people are very warm. I have heard many stories that Ireland is pretty unsafe, and might be still true. But I did not feel it when I was there , ( may be because I was in many cities which are much more unsafe than Ireland ). The only thing I can complain is Belfast is not designed for tourists and it was very difficult for the tour bus to stop and fetch  the passengers.

I went to Ireland  when I was very down last summer 2019 . I thought of going there alone. Luckily, one of my Uni classmates joined my trip unexpectedly. So we had a nice time , catching up.

Here are a few things I did in Ireland with my friend.

In Belfast, I stayed in a travel lodge hotel in city center just for two nights. The first day was just to relax and look around the area. On second day, we did a Northern Ireland tour.

Near our hotel, there was St Malachy’s Church . a gothic style church which is regarded as one of the most romantic buildings in Belfast. It was built in 1941 and inspiration of the design come from the galleried chapels of rural Ireland.  We did not have a chance to go in as it was quite late when we arrived. 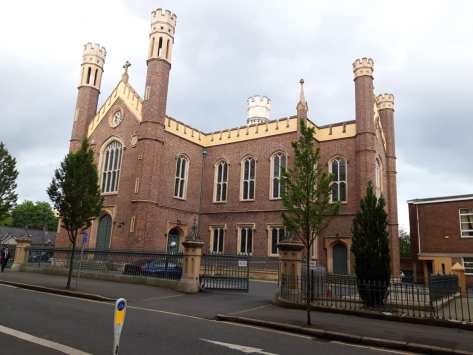 Then we walked to the city center to see Donegall square. We admired the statues around that area, but we did not have chance to see Library and Titanic museum. One girl whom I met during the trip told me Titanic museum is very good to visit and you need a few hours to cover.

I  would like to post following photos to show that architecture of Belfast is in danger of being shitted everyday by pigeons and sea gulls. Take note, they choose to shit on the heads usually.

Then we walked to St Mary chapel which is the first Catholic church in Belfast. As most people in Belfast were protestants, it was such a milestone for Belfast in 1784. 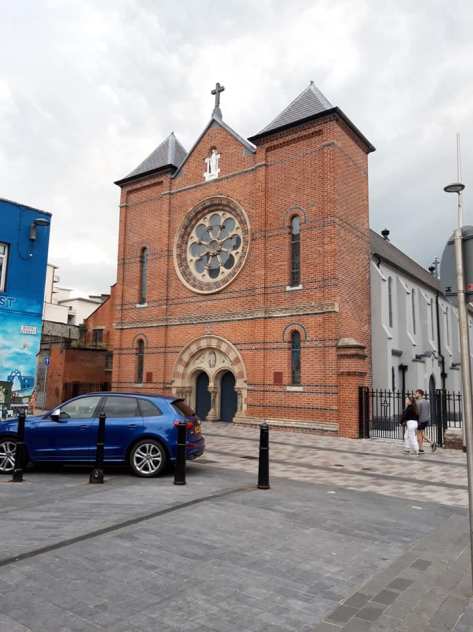 Then we walked around chapel lane and observed the mural paintings of Belfast. Belfast have many  street artists and mural paintings are used to express the idea ,  culture and political view  of people  . There are even some tours which focus on mural arts. I should do the tour one day. 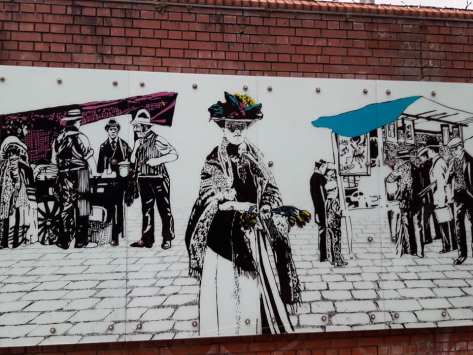 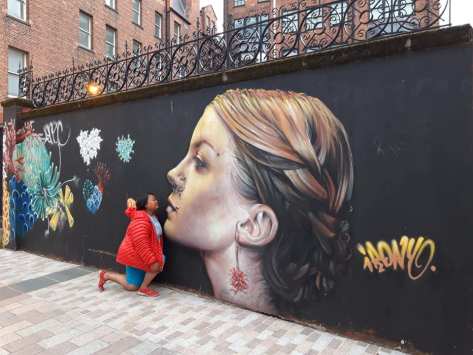 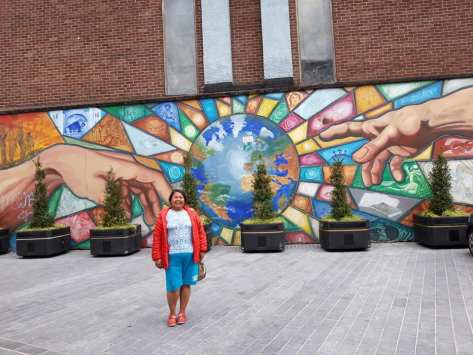 To travel around Belfast, I took the tour from Tripadvisor called ” Game of Thrones Filming locations tours of Northern Ireland. The tour was 45 GBP per each and duration was around 9 hours. The tour includes Giant Causeway, the Carrick-a-rede rope bridge and the Dark Hedges.

In between these places, the bus stopped at some scenic places .   Here are the stops along the Giant causeway route . 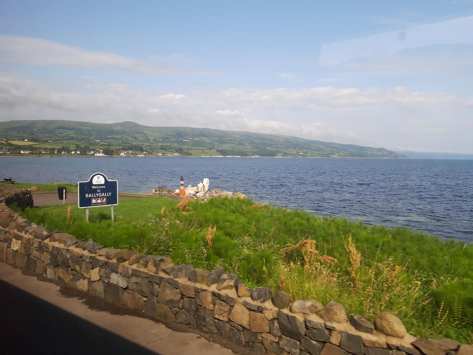 Ballagally is a beautiful beach town on Antrim coast.

Ballygally castle is the 17th century castle and it is well known for having at least 3 ghosts.  The most famous one  has been around for the best part of 400 years. The popular theory is that the ghost is that of Lady Isabella Shaw, wife of Lord James Shaw. 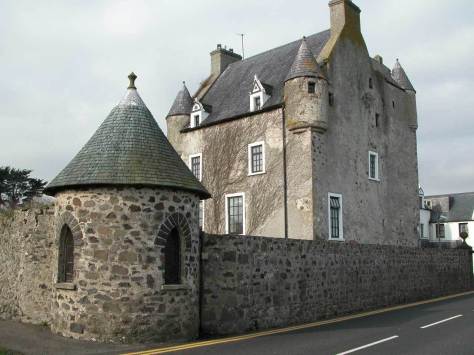 Legend has it that Lord Shaw wanted a son, and when his wife delivered his heir, he snatched the baby from his wife and locked her in a room at the top of the castle. While trying to escape to search for her beloved child, Lady Isabella fell to her death from the tower window! Another theory is that she was actually thrown from the window by the cruel Lord Shaw or one of his henchmen!

Lady Isabella’s ghost is reputed to be a “friendly” spirit who walks the corridors of the old castle. Over the years many guests have reported strange experiences and have felt a presence in their rooms! There are also endless stories of unexplained noises in the night and an eerie green mist over the castle!

Ballygally Castle is very proud of its permanent ghost resident and has dedicated a ghost room for the curious travelers.

For those brave enough to visit the room of Lady Isabella, make your way to the top of the spiral staircase. if you would like to find our more about the Castle History and a Ghost Tour with a member of the hotel staff please call +44 (0)28 2858 1066.

The bus stopped at Carnlough harbour because it was the location in one of the scenes of Games of Thornes. Apparently, I have no idea about that movie as I have never watched it. But I like that peaceful atmosphere and there was a nice coffee shop. We were given a few minutes as a toilet break.

I saw a memorable plate about a war pigeon called Paddy at the harbour. During World war II, pigeons were used as messengers to carry coded information. Paddy was released in Normanday and returned back to the base in 5 hours time which was the fastest time recorded. Paddy lived 11 years and was given Dickin medal  which is animal equivalent of Victoria cross. Paddy was the only Irish recipient of Dickin medal to date.

Among all destinations, I love Cushendun the most. It is a very beautiful town.

Cashendun is a ferry port which is a stone throw away from Scotland. It has become popular because of its colorful past, exotic architecture, caves and churches. Clough-Williams-Ellis ( 1883-1978 )  was the famous  Welsh architect who designed some of Cushendun buildings. We did not have chance to visit those buildings.

I  found an interesting seat called Fuldiew seat at the cushendun port. In 1803, a tragic story of two lovers happened  . The tomb of the boy  was dated back to 1803 which can be found in St Parick’s church.  The  legend  has been told repeatedly for over 200 years with some embellishment . The Fuldiew seat was erected to commemorate the tragic story of lovers   by district development association in 2013.

The story of Fuldiew story was like that . An 18 year old boy named John McAlaster had a childhood sweetheart, Mary,  to whom he was engaged. John went out to sea as a sailor and  supposed to come back to Cushendun to mary Mary . Instead, he died aboard , killed by someone and his body was returned to his home town by ship . Mary was not aware of that in the beginning . However, when she found out about the tragic death of her lover, she  died of broken heart. People found her dead body lying next to tombstone of John. She wrote some words on the tombstone using sharp stone.

Before we arrived at Giant cause way, the bus stopped near Dunluce castle which was built around 1513. The iconic ruin of Dunluce Castle bears witness to a long and tumultuous history. First built on the dramatic coastal cliffs of north County Antrim by the MacQuillan family around 1500 and later seized by the ambitious MacDonnell clan in the 1550s during an era of violence, intrigue and rebellion.

We did not go to the castle although you can choose to go if you are interested in seeing archaeological remains. Entrance fee is 5.50 Euros for adult and it opens daily.

The Giant’s Causeway is a UNESCO world Heritage site. I had never seen many hexagonal stones lying close and fitted to each other before. These columns of stones were transformation of larva erupted from fissure of volcanoes.

Before you venture there, please look carefully at below photo. It is the map of Giant’s Causeway and one of the main attractions is Wishing chair. Unfortunately, the chair was occupied a long time by some tourists that time ( may be not aware of the fact that they should give chance to others, even it does not mean our wish can be granted by simply sitting on it ). So I did not have a chance to sit on it. Basalt stones are cold , shiny,  smooth and quite nice to sit on them actually. 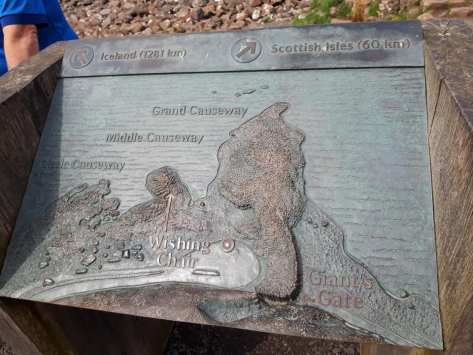 When I googled it, I found out the photos of Irish women sitting on it in 1900 with the hope of selling their religious memorabilia ( mirrors, hair brushes , booklet etc ) to travelers. The chair is perfectly formed by columns of basalt stones. 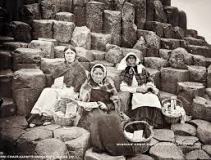 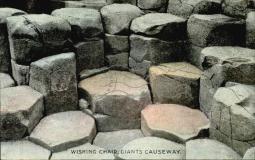 To make your wish come true, you need to wiggle 4 times, then rub the stone to your left  with your left hand. saying your wish before sitting.  ( you never know unless you try it yourself ) 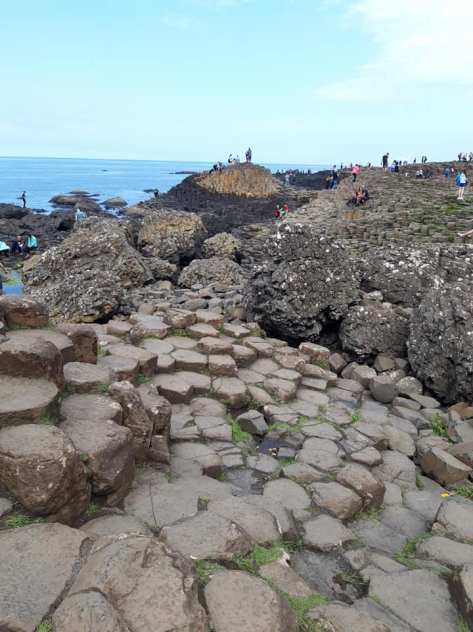 The science says these beautifully stacked stones were formed 60 millions years ago. However, another side of story is a legend. According to Irish legend, Giant Causeway is formed by an Irish giant named Finn McCool who got into trouble by fighting with Scottish giant called Bennandonnar. The latter wanted to claim Ireland as his property. Enraged Finn threw away boulders into the sea to make a way towards Scotland. After arriving Scotland, Finn noticed he could not beat enormous Bennandonnar and had to run back to Ireland by passing through Giant Causeway  . He was rescued by his witty wife who conned his enemy by portraying Finn as a baby. Bennandonnar ran away thinking Finn as the  son of his enemy.  His enemy thought if the baby was that big, father would be impossible to beat. 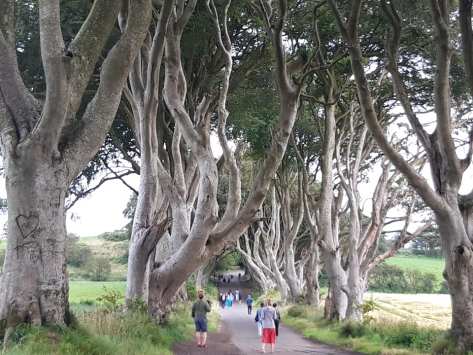 Dark Hedges were rows of very old beech trees which were planted in 1775 by owner of the property James Stuart. The intention is to create an imposing approach to unwanted visitors.  Like other places of Ireland, the folk believed that trees are regularly visited by ghosts.

The place became popular because of Games of Thrones movie. The old trees are surreal and gives very artistic illusion . I am quite upset to see tourists wrote graffiti on the trees. 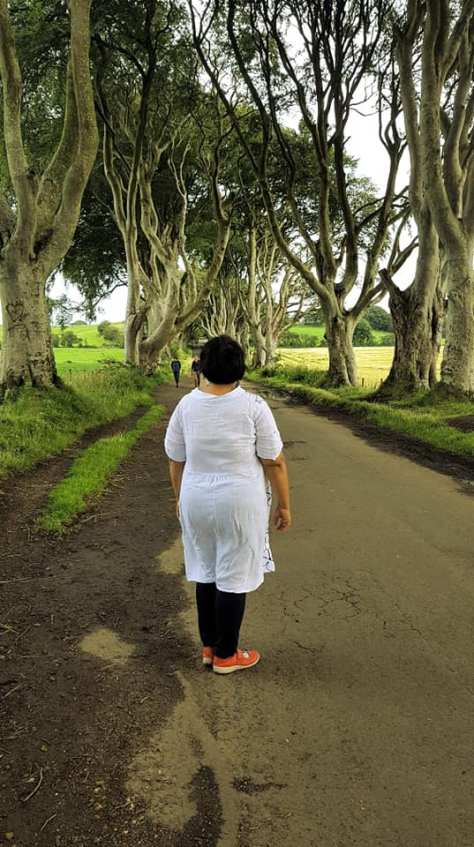 The highlight of the trip is Carrick-a-Rede Bridge which was situated along Giant Causeway route .  The bridge connects mainland and a small island called Carrick-a-Rede. You need to walk  around 30 minutes   to walk up and down the hills to reach the bridge.  At least, you need  1 hour to visit the bridge . The island was formed from volcanic eruption and it was linked to the mainland by a flimsy bridge  . The bridge was made of plunks linked each other with wires of ropes. 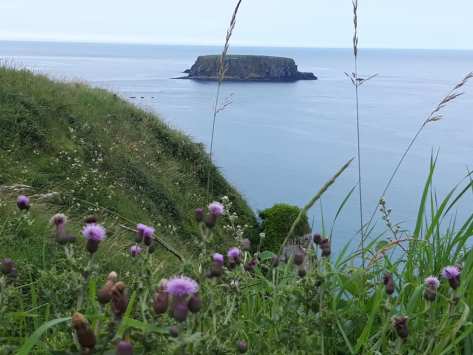 The bridge was originally used by salmon fishermen during summer . It is no longer used for fishing as salmons are very scarce now. It was used only during summer in the past and dismantled during winters. However, as the site became a tourist attraction, the bridge has been  open year round as long as the weather is permissible. Rope access specialists have to check the safety all the time . When the weather is bad, tourists are not allowed to cross the bridge. We need to give entrance fee and need to walk quite a while. There are lots of  stairs . The view of the rocky coastline mixed with basalt , hardened larva  ( dark rock ) was mesmerizing. I was glad that we had a good weather that time. 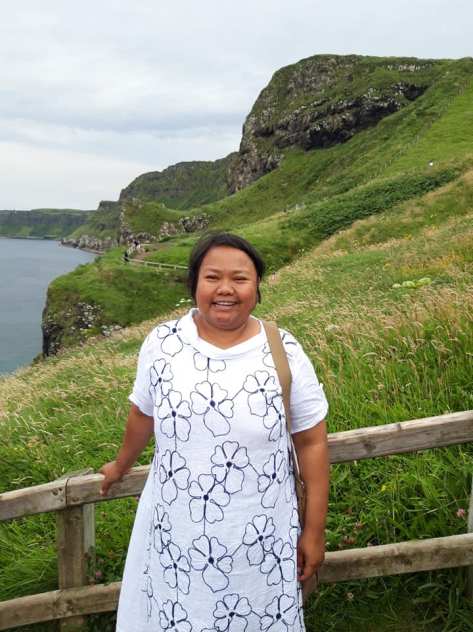 When we pass the bridge, it means we are passing  through the mouth of volcano. I can imagine the skill of fishermen as they used to cross the road with one hand holding the rope and one hand holding bits and pieces of fishing gear and fish.

The trip lasted for 9 hours and we were tired when we arrived back. Even with that, we managed to go to a buffet dinner and had a fantastic meal.

I will write about tours in Republic of Ireland soon.

Thank you for reading.