The Cregneash village lies near Port Erin which is south part of island called Isle of Man . 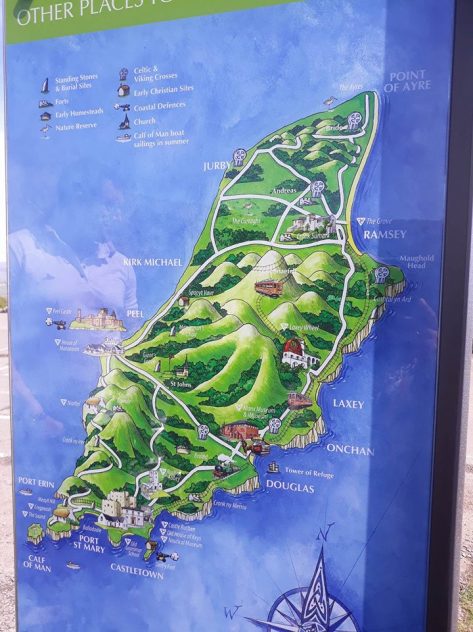 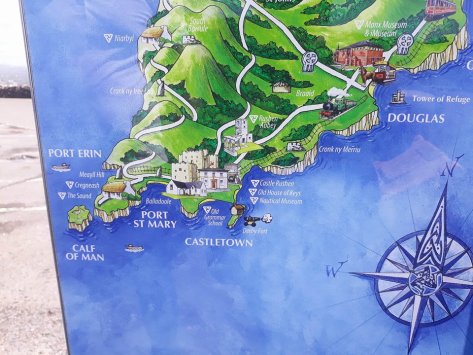 The entire village was left as the way it was since 200 years ago just to attract tourists and to preserve the life style of villagers in peaceful nature. Cregneash has become an open-air folk museum. The surrounding fields are now once more in cultivation and visitors can again see the landscape of old time again. Cregneash is also a living village where people live and work.

Visitors can see traditional rural skills and crafts being practiced. They can learn new things and remember some old skills such as milking cows, reaping and ploughing using ox wheel carts  etc. 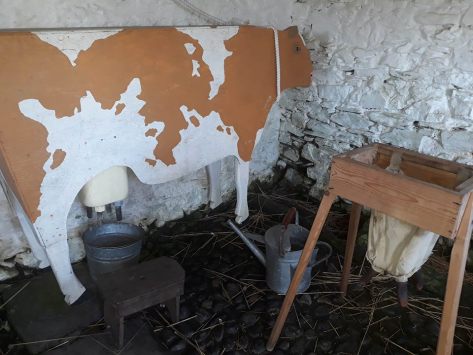 The Cregneish folk were just like a great fisher-family entirely left to themselves and a little disturbed by the outside waves of modern life with its rush and hectic pace. They were frugal, hardy and sea-toiling men, whose lives were divided between mackerel fishing and the harvesting of their little oat and potato crofts. ( Charles Reader-1901) 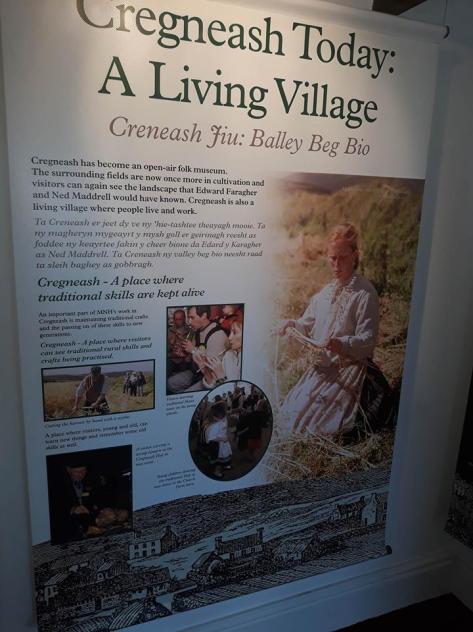 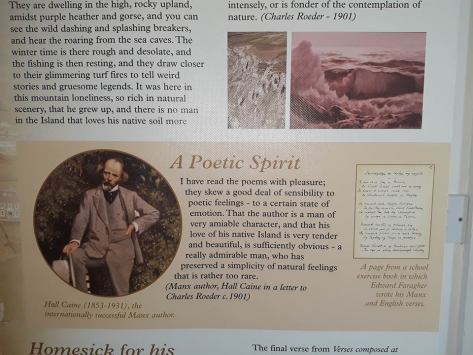 When you walk inside the small village, you can instantly fee the ease and peaceful surroundings. You can browse inside the displayed houses and sheds which store tools for agricultural and construction. You can see the small cozy bedrooms with weaved fabric on the bed and little cots for babies etc.

When we met the guard of cregneash village, he explained that the floor of the cottages are made of clay mixed with oxen blood. Sometimes, when you wander barefoot, the soul can become pink color because of oxen blood.

Some houses displays the social status of the owner. For example, there is a double storey  house which is much wider and have some luxurious furniture.  Most houses are very low ceiling to keep warmth and it is also not surprising that many members used to live in a tiny cottage.

above house has some good furniture and a rather spacious living room.

Sadly, among China ware, we also found out some cutlery which is made of lead. Without awareness, villagers were eating poison, ( lead) everyday by using these food containers

It gave me the impression that the villagers are pious Christians as I can see displays of quotes about God in the rooms of houses. Some houses also display the items which are used to expel bad spirits. These items are made of wood and feather.

Other interesting animals you can see are Manx Loaghtan Sheep which has multiple horns ( having from 2 to 6). This breed is native to the Isle of Man and is one of the rarest breeds of sheep in the British isles, nearly becoming extinct in 1950 ( only 43 surviving ) ,in 1956 The Manx National Trust acquired their first sheep and started a breeding program to save the breed. 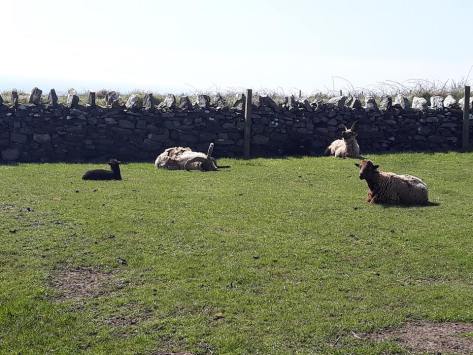 The name LOAGHTAN comes from two Manx words “ lugh” ( mouse) and “ dhoan” ( brown ) which described the light brown colour of the sheep.

They are very hardy mountain breed, well able to withstand harsh winters and they regularly produce twin lambs. They are an official rare breed but as they become more popular, their numbers are rising, so providing an assured future for this unique animal. Now, there are still fewer than 1,500 registered breeding females in the United Kingdom.

Another distinguished animals you can see in Isle of Man especially Cregneash village is the Manx cat which are entirely tailless or only have a small stub of a tail. The animal originates from Isle of Man , with a naturally occurring mutation that shortens the tail. They were known in the island since early 19th century. There are lots of legends explaining why Manx cat are tailless and some believe Manx cats are hybrid between cats and rabbits referring to the cabbit” folktale.

One of the reason Cregneash culture is maintained and  preserved is because of well known Manx poet called Ned Beg Hom Ray ( Edward Faragher ) who grew up in Cregneash and devoted whole life to Manx language and poetry. His family lived in Cregneash for many years, in particular in the tiny cottage which is now displayed as the museum.

He became famous outside Cregneash because of his talent for writing poetry and hymns in Manx, his translations of Aesop’s Fables into Manx and his numerous contributions to Charles Reader’s Manx folklore collections.

Faragher family were a family of fishermen for generations untold. There was little English taught and known in Cregneash, his mother being the only person who could converse with strangers. His father was a fair scholar, and wrote all the letters to the Cregneash people, and that was a great thing then. The family being large-there were twelve children-he had to go to sea very young and joined his father’s boat, fishing with him for seven years . ( Charles Reader-1901)

For a short time, he went to Liverpool to become a safe-maker, working amongst Welshmen, who were worse English speakers than himself, and he learnt but little English there. His longing, however , for the sea and his heather-clad hills was too over-powering , and he returned again to Cregneish, and fished for mackerel at Kinsale and on the West coast of Ireland for 25 spring seasons. He has been shipwrecked and narrowly saved and weathered great storms in his rough voyages. ( Charles Reader-1901)

They are dwelling in the high, rocky upland, amidst purple heather and gorse, and you can see the wild dashing and splashing breakers, and hear the roaring from the sea caves. The winter time is there rough and desolate, and the fishing is then resting, and they draw closer to their glimmering turf fires to tell weird stories and gruesome legends. It was here in this mountain loneliness, so rich in natural scenery, that he grew up, and there is no man in the island that loves his native soil more intensely , or is fonder of the contemplation of nature. ( Charles Reader-1901)

The people of Cregneash gathered a great deal at other people’s houses, and one of their favorite diversions was the telling of stories about fairies and ” bugganes”…. heard people declare that they had seen the fairies in the form of little men in red caps. Bugganes are monsters covered with coarse hair and have red scary eyes.

The ” buggane” stories were very frightening to the children, and some were told with the idea of keeping children out of mischief.

When I went to Cregneash in April, some actors were there to display the exact picture of the village 100 years ago and I could take some pictures of them.

Near Cregneash, you can also see the Manx artist house with big hand statue, in memory of Edward Ashton Cannell. 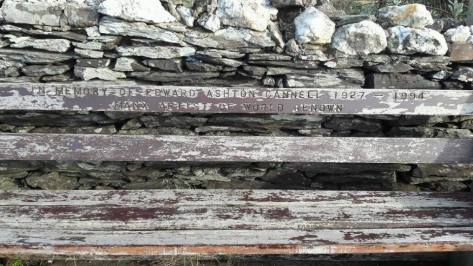 If you have time, you can enjoy a cream tea at the Cregneash tea room in the village. Make sure you bring cash as they cannot accept  credit cards.

For me, Cregneash is a must when you visit Isle of Man.